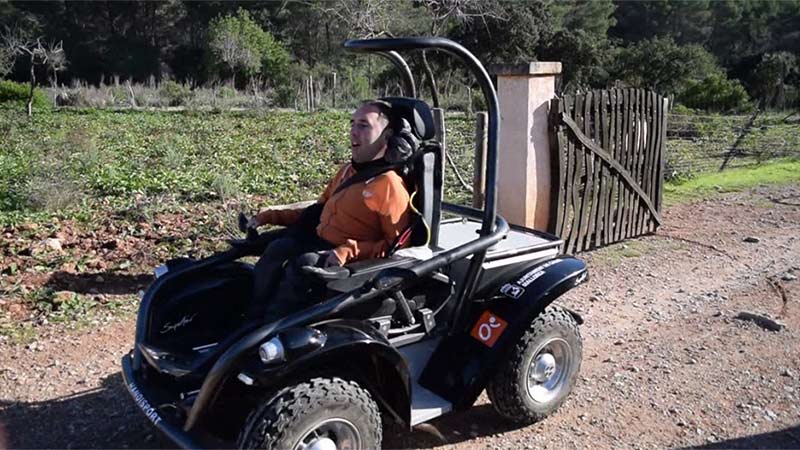 There’s very few emails I dislike receiving. I love my job! However there’s also only a few emails that I get extremely excited about. One of those such occasions was being invited to visit Mallorca at the end of last year.

Clara and Rafa from Handisport said “do you want to come for some winter sun, try out sailing, mountain trekking, blokarting, and tour the capital Parma?”. I was like errr YES. Such a fantastic opportunity right?

So Kasia and I flew on a Monday and had one of the smoothest flights ever. So good I tweeted EasyJet a big thank you. We were greeted at Parma airport by the very happy and helpful driver Hugo from Autocares Adrover. He took us to our ‘Island Mallorca‘ hotel and we relaxed with great food and a glass of wine. The hotel room had a fantastic wetroom shower and Handisport had rented a hoist from Mobility care. I took my own sling, as I usually do.

After a great sleep we ate a delicious breakfast (the food was constantly delicious!) and we met Hugo by the adapted van. Day 1 of the itinerary had began. Off we headed to tour Parma with ‘Routes for Palma‘. We rolled around the streets, learned of the history, and saw many interesting places. My favourite was the cathedral that was originally surrounded by the sea. It now stands a little back from the water, but looks out to the horizon beautifully.

After 2pm we headed for a typically later Spanish lunch. It was hosted at the amazing restaurant Es Museu. Starter, mains, drinks, desert and coffee. I was so full and content on that warm Mallorcan terrace. Delicious.

That afternoon we were scheduled to go sailing. However on a rare occasion I decided to sit this activity out. I’d sailed many times before, so I wasn’t missing out on a new activity. I was feeling very tired. Overall I wanted to keep my energy up for the next two exciting days.

After a warm late afternoon meander from the harbour, we explored the hotel spa. By using my shower chair on wheels that I always travel with, Kasia could push me into the sauna and steam room. Probably not a great idea with my electric wheelchair.

I’ve never been a ‘spa guy’ – whatever that means. But I could get used to the feeling of relaxation they give you. The following night I had a back, neck and face massage. Plus the sauna and steam room again. Tough gig!

On day 2 of the itinerary Hugo was waiting with his big smile and hilarious conversation. We were to drive further this time to the mountains. Half an hour later I was being lifted by the Handisport team into a mean-machine.

Big tyres. Suspension. Speed. All driven from a joystick like my usual wheelchair! Plus it was comfortable. It was a VERY new experience for me. The machine chewed up the bumpy and sloping terrain. I felt like an explorer in unchartered territory. Here you can see the video we made, including the machine, and my huge smile!

Following a short drive, more delicious food, and great chats with the Handisport team – we headed to a field. Yes a field. To try blokarting!?

If like me you don’t know what blokarting is, let me explain from my recent experience. Imagine a sailing boat on wheels. That’s it! It’s literally a kart on wheels, propelled by the wind in the sails. It was very exhilarating too.

It wasn’t possible for me to operate the speed or the steering. However I enjoyed learning about how the process works. The way the sails are moved to catch the wind and give velocity was so clever. All with the mountains in the background.

On the third and final day, we were speaking at a Mallorcan government building. Myself and the two other bloggers (from Spain and Brazil) gave accessible travel stories and insights. Professionals from government, businesses and charities attended.

It was great to see passionate people trying to improve their community for everyone. Remember accessible travel tends to be adventure travel. We’re all aiming for inclusion. Everyone should be able to go wherever and do whatever they want.

Well done and thank you to Handisport, Hugo, the Mallorcan government and all of the project partners mentioned above.