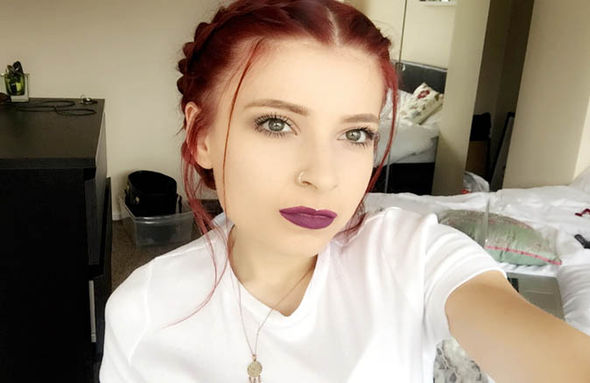 My name is Rebecca Dann and last year I won Disability Talk’s A World Of Unfairness” photographic competition. And my prize was presented to me by Professor Stephen Hawking.

When I was 12 I believe, I took a turn for the worst and my legs started to slowly give up on me. It started with me falling over a lot randomly, then eventually my legs got heavier and harder to lift and I started to drag them, then it moved onto me having crutches and then I was eventually in a wheelchair.

It was an incredibly sad time for me, I was hitting a very confusing time in my life (oh the joys of puberty) and felt like I’d lost independence and freedom.

I have Kyphoscoliosis and after an operation that didn’t go to plan, a nerve got trapped and caused damage meaning I got ‘drop foot’ as they called it and although I could move and feel my legs, they were basically just like heavy weights that I couldn’t lift up.

I started to use an electric wheelchair because it gave me the most independence I could have at school. I straight away had to go to the support centre at school and I can remember hating every minute of it. I felt like I was treated like I couldn’t possibly do anything for myself anymore and they said I needed a teaching assistant with me all the time, which I knew I didn’t. Yes, I needed help in the toilet but that was it, and that was horrible enough and so I wanted to carry on as normal in school, but they wouldn’t allow it. They really didn’t give me a choice in the matter, they didn’t ask ‘what would help you?’ they just allocated because they thought they knew.

I remember snapping at a lady and her response was, “we had a student that felt the same way as you a few years back and then eventually when they left school, they visited me and thanked me for everything I’d done” I remember thinking ‘I can’t see that happening with me’ – I was mad. I was also right, if I was to see her now, I wouldn’t thank her at all, she made me feel inadequate and useless at a time I really didn’t need that.

The thing I find weird is that it wasn’t until many years after leaving high school that I reflected on my time there and realised they didn’t help me at all. But I never once questioned it as a student there, because I didn’t even think it was wrong. I just accepted everything they did and that makes me sad. I wish I could go back and speak out more.

An example of them not doing their best to make things accessible for me was my English lesson. We had two levels to our English classes, and mine was upstairs, bearing in mind there were classrooms downstairs, instead of swapping them around so mine was downstairs, they put me in the top set set class downstairs (I was a bottom class student) and so I spent most of the time there feeling incredibly dumb because I didn’t understand the work, because it was to a higher level than what I learned at. Eventually I was moved into a completely new class which was more my level but also not what I was used to.

Then the worst thing I remember was Literacy which I had at the end of the day, this was also upstairs. There weren’t any other classes going on at this point, and yet they still, they had the classes upstairs. Instead of moving it, I was put into a cupboard .. yes, you heard right .. cupboard. There was a stationary cupboard downstairs that had a table and chair in it, I think people were put in there when they’d been misbehaving in class. So I went in there, alone. I mean, I got a hell lot of stationary from there for free. Eventually I was allowed to have a friend with me, we were just asked to copy from text books but realistically we just completely mucked around in that lesson, in all honesty it was the best lesson and that’s probably why I never questioned it, because I could muck around and never do work. Then another person joined our Literacy class and he was also disabled, he couldn’t bend his legs and so couldn’t walk upstairs. Instead of the cupboard we got moved into one of the empty classes downstairs and he was also allowed to bring a friend .. where is the logic in this? I have no idea. They continued having their classes upstairs.

Spotting my dyslexia? My anxiety? There wasn’t a thing then, whether it was because it was very much an ‘unspoken about’ thing back then or what but I feel so much hate towards my school years because I spent it feeling confused, isolated and stupid. It took me educating myself on dyslexia and anxiety for me to finally go and seek help and finally having that diagnoses (which wasn’t until my University years).

I do feel let down by my school a lot, in more ways than just accessibility and equality (but that’s a whole other story and maybe I’ll do a Part 2 sometime!).

I hope that more students are vocal about these things than they were then when I was a student.