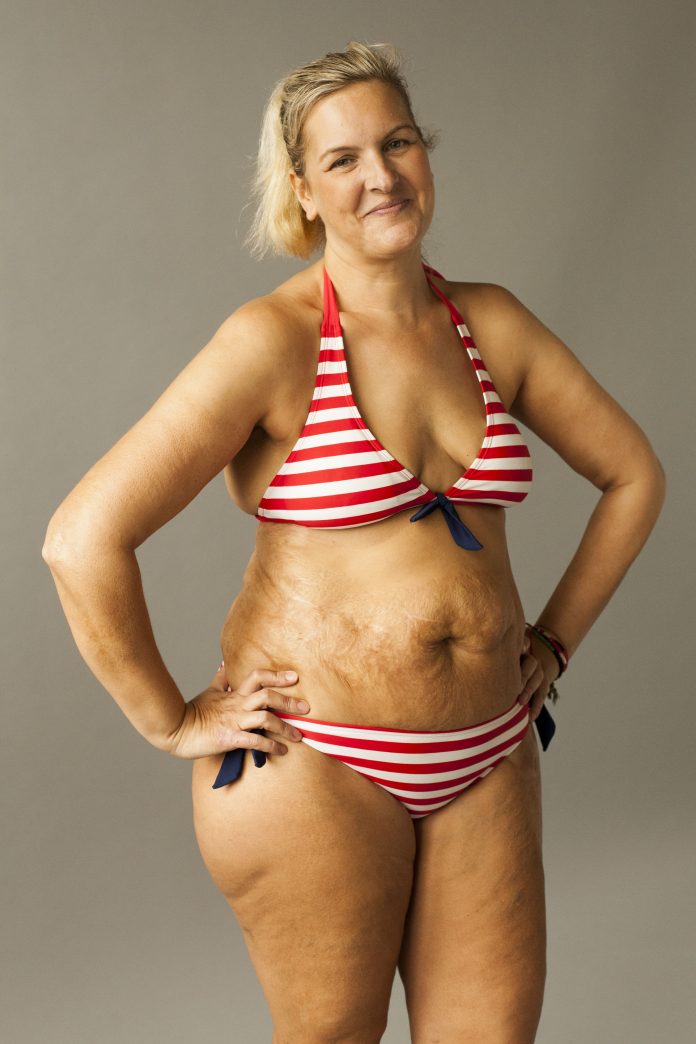 Sylvia Mac, aged 49 and mother of three children, had a childhood accident which disfigured her for life causing deep scars to her body. When she was a three year old, she played a game of ‘hide ‘n seek’ with her sisters. Her mother was boiling water for their bath and laid the bowl onto the bathroom floor. Sylvia decided it was the best place to hide so ventured in and stood behind the door. Her sister pushed the door causing her to fall backwards and sending her into shock. There was pandemonium in the house, screaming and her mother trying to help save her daughter. The paramedics came and took her to the nearest London hospital who couldn’t treat such severe burns and sent her out to Mount Vernon Hospital in Middlesex miles away from her family home in London. Sylvia was put into an induced coma and family told to say their goodbyes. She miraculously pulled through the life support twice and went onto have numerous surgeries. Spending many months in hospital, alone at night and gong through painful skin grafts and procedures caused this young child to have nightmares.

Sylvia went on to spend her years suffering with PTSD, Anxiety, Pain and Depression which physically and mentally took its toll on her life. Throughout her school years, she hid away and sat at the back of the class trying not to be noticed. She would only visit the rest room when no-one could see her looking at herself in the mirror. She couldn’t sit an exam without her head being somewhere else and her mind going blank.

Sylvia’s father subscribed her to the local swimming club where she became a competitive swimmer and although she had potential to become an Olympian, she had no confidence and low self esteem. She was able to achieve but held back in competitions so no-one would notice her. She was bullied on the poolside when her scars were on display causing her to believe she was always going to be ugly.

Throughout her later years, Sylvia found it difficult to find jobs and lied to her family every time she attended an interview. Her lack of confidence and self-esteem took its toll on her causing her to turn to alcohol and not leave the home. In her 30’s she was scouted by a modelling agency who turned her away after filling out a form that asked if she had scars. From that day, she believed that she would never be accepted in society or ever be beautiful. She began to have suicidal thoughts wanting to finish her life but always thought of her family.

As time passed by she she spent more and more time locked away in her room often crying and attacking her family. She became a sad and lonely person but always knew that her children and her family were her backbone. She loved her family so much that this was the turning point for her.

Whilst on holiday Summer 2016, Sylvia was being videoed by a man which upset her so much both Sylvia and her mother went to the beach. At the beach, her mother was staring at her scars and looked very sad. Sylvia didn’t want this for her mother so went to the water’s edge and pulled off her dress. Underneath she was wearing a bikini and everyone seemed to be looking at her. She called out to her mother, “look at me, Mum look at me” and Sylvia began to smile and pose. She went over to her mother and said, “from now on everything will be OK, I’m OK”, and she began to smile,

In October 2016, Sylvia set up a facebook group called LOVE DISFIGURE which supports and raises awareness for those living with a disfigurement whether a skin condition, health condition, burn, mark or scar from accident, surgery or self-harm. Sylvia uploaded a video on youtube which shared her story and scars on her body. She began to share pictures and then set up a fortnightly swim group for people with disfigurements.

Sylvia has gone on to talk with BBC World Magazine, BBC Women’s Hour, BBC Radio 2 Jeremy Vine and BBC Sunday morning live. Sylvia has become a campaigner who tells people that they can change their life. Even though it took her 45 years, she knows that by changing her mindset and becoming positive she would’ve been able to change all those years ago. Sylvia has helped many people change their lives through the power of social media.

As told to Disability Talk by Sylvia Mac

Sylvia will be contributing regular ‘blogs’ in the future